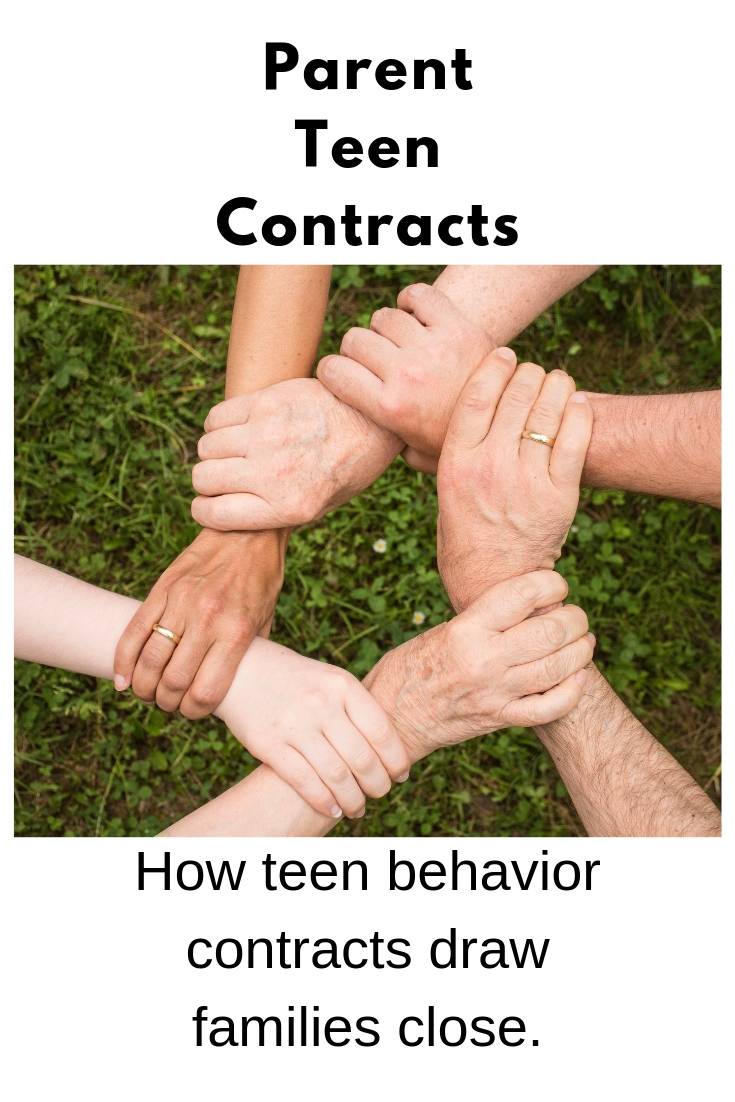 When my boys were really young and I was a tired mom, a dear friend reminded me that I am “not raising kids, I’m raising adults.”

Her words stuck with me, defining my parenting style from that day forward. I wish I could say that it made parenting a lot easier to redefine my purpose. It did not.

But, it did help me keep focused on the goal — to raise people who I’d be happy to call “friend” once they left the house. My oldest is now 25, married and successfully adulting. He’s still my son, and I’m always willing to lend an ear when he needs to work through something, but he has definitely become one of my very best friends. The other two are headed that way. I love my kids — and they seem to like me okay. 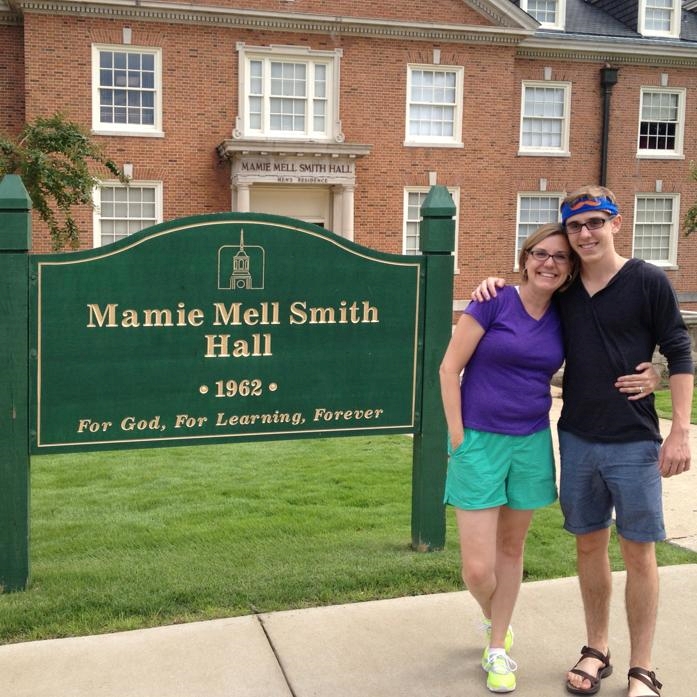 One of the tools we relied on throughout their childhood, especially in the teen years, was a behavior contract. When I was homeschooling, the boys had contracts for school expectations. When they got cell phones, we made informal rules at first.

But, when they got smartphones, we moved to an actual cellphone contract to define expectations and responsibilities. We had contracts for driving and college as well.

What is a behavior contract for teens?

Simply put, a behavior contract for teens is a parent-teen contract that defines expectations, responsibilities and consequences. Done properly, it’s a positive experience allowing everyone to discuss expectations before problems arise.

Think about it, when kids are really young, the rules are pretty black and white. Don’t touch the hot stove. Why? It can hurt you. Oh. That’s easy.

Or, before bed, we always brush our teeth. Why? Because it helps our teeth be healthy and strong so we always have a beautiful smile. Easy!

But, when kids get older, life gets more complicated. They want things, like independence, that can be hard for parents who want to keep their “babies” safe. And, there’s a whole lot less black and white and a whole lot more gray in the teen world.

We can’t predict every single situation and make a specific rule for it.

That’s where the contract comes in.

We’ve had many behavior contracts for teens through the years. Our early contracts were a bit vague, with us making assumptions about what needs to be clarified. So, 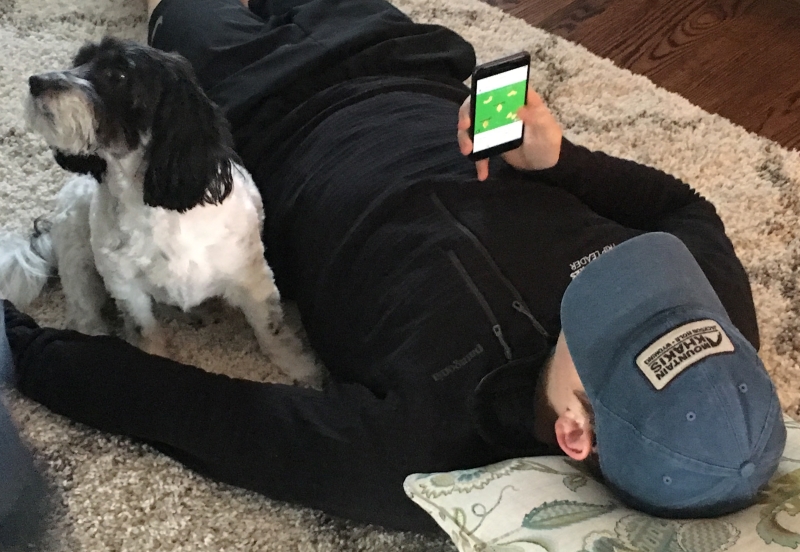 The cellphone contract made our expectations clear:

The consequences were also clear:

In print, this might seem really harsh, but we didn’t just drop it on them.

We talked through each element of the contract and decided together what was reasonable. The contract changed when they got jobs and needed their phones more available. The goal of the cellphone contract isn’t to control and limit their phone use, but to help them have control over their phones.

Of my three kids, only one has had a hard time abiding by the terms of the contract. But, because we discussed all the terms beforehand, and review them regularly, we maintained a good relationship.

When conflict arises, we can fall back on the contract, ask questions about the child’s behavior in the terms of the contract and remain calm.

And, while a third infraction leads to “permanent” phone loss, we chose to revisit that at each next birthday — expecting and encouraging maturity needed for smart phone ownership. 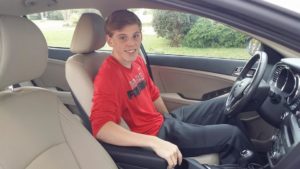 When our kids got driver’s licenses, they shared our cars. We did not buy them a new car — or even a used car — so they had to be respectful of the family vehicle if they were going to get behind the wheel. Even if we did buy them a car, teen drivers should be expected to drive responsibly.

Because teen car fatalities are more common than we want to acknowledge, we entered into driving contracts with our teens before they were allowed to drive independently.

Our driving contract addressed the following:

The consequences of breaking the rules:

One of our kids had an accident, was at fault, and was not where he said he would be. He totaled his own car, but no one was seriously injured. According to the rules, we would not purchase another car for him.

But, he went to college out of state and had a job off campus. We agreed to purchase a car that he could use during college, as long as he maintained it and paid the insurance for it. While the driving contract specified clearly that we would not buy another car, we applied that rule with some grace.

One, we knew our son made a mistake common among new drivers. And, while he wasn’t where he said he would be, he was also in college when the accident happened, so that rule was something we hadn’t been enforcing anyway.

It seemed unfair to re-enact a rule that had become obsolete due to circumstances. And, he didn’t have easy access to public transportation and would have had to give up his off campus job if he didn’t have a car.

So, we modified the contract to be supportive, but fair. He didn’t ask us to change the agreement, and he knew we made the choice to help him out of love. 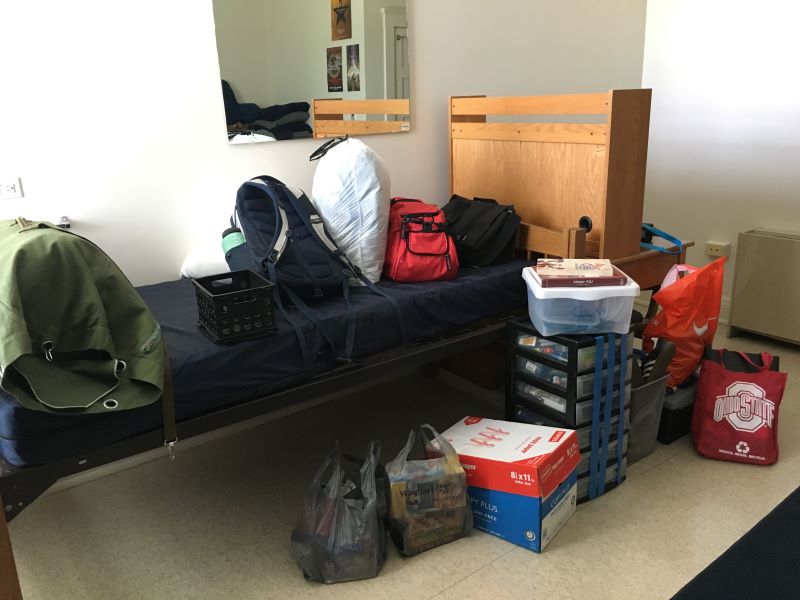 When our kids went off to college, we made sure they had all the essentials for dorm life. And, we had a contract for that, too. We spelled out expectations for grades, behavior and general expectations for young adults.

Consequences reflect that we pay for college (a goal we set for our family before we even had kids):

One of our kids went through a really tough time, and faced some difficult consequences during college. We hadn’t discussed the specific circumstances as we never anticipated them, but we used the college contract to decide how to address the issue.

The problem fell into the bad semester type problem, but we caught it before the grades completely tanked. Instead of making our child pay for the whole next semester, we paid tuition and the student paid room, board and entertainment. That ate into our child’s savings account, but helped him realize that growing up means taking responsibility for actions.

How to construct a Family Contract for Teenagers

The best time to write up a family contract for teens is before you need to enforce it! So, when your child gets their first cell phone, have a contract outlined and then discuss it to make it what works for your family. When your child gets their driving permit, review rules and expectations throughout that time and finalize the contract before you let them drive alone with a full license. When they’re going off to college, discuss the contract in June and July — not the day before you drop them at school.

An effective family contract defines expectations before the rules are needed!

Elements of a parent-teen contract

Effective family contracts are focused on positive parenting. Recognize their need for independence and also your responsibility to them. The best part of a parent-teen contract is it frees parents from having to nag kids. Clear expectations, mutually agreed and understood, are easy to enforce. Not painless — oh my goodness — but objective and clear.

Include these elements in the contract:

One of the most important elements of an effective behavior contract for teens is discussing it appropriately. It really doesn’t work as a disciplinary tool — though, it can be done. It’s just harder to discuss when feelings are already hurt or trust is already broken. Being proactive makes it more effective.

Be prepared with your concerns and expectations, but be willing to modify them to meet your teen at a place comfortable to both sides. Remember, you’re raising adults, not kids — they need to know their voice is heard and respected.

After you discuss everything, write up the contract and review it. Make sure everyone’s clear on what is expected.

Then, follow the contract! Don’t nag. Let it do the nagging for you!

That’s the hard part! But, it does get easier. I promise!

Enforcing the behavior contract for teens

I wish I could say kids magically just follow the rules of the contract, but they don’t. My kids are pretty low key, but they all have broken contract terms at some point.

Don’t get mad when that happens. Just pull out the contract and calmly review what happened.

And then, apply the terms of the contract. Modify to be fair (like we did with the car scenario) if you feel you should, but then redefine the contract to include the modified terms.

AND DON’T JUST GIVE IN! You’re raising adults. They need to know actions have consequences, but also that sometimes, grace should be given.

Pin it for later 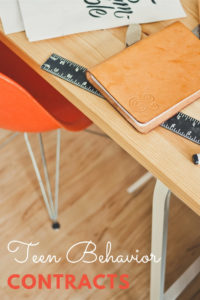 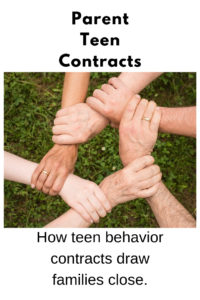 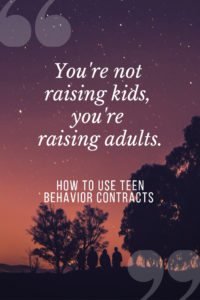 Do you use parenting contracts? What works in your house? If you have a great story, get in touch and let me know. We can all benefit when we learn from each other.

Previous Post: « 5 healthy foods that taste great, too!
Next Post: Tangy Mango Salsa: A fresh take on a Mexican classic »