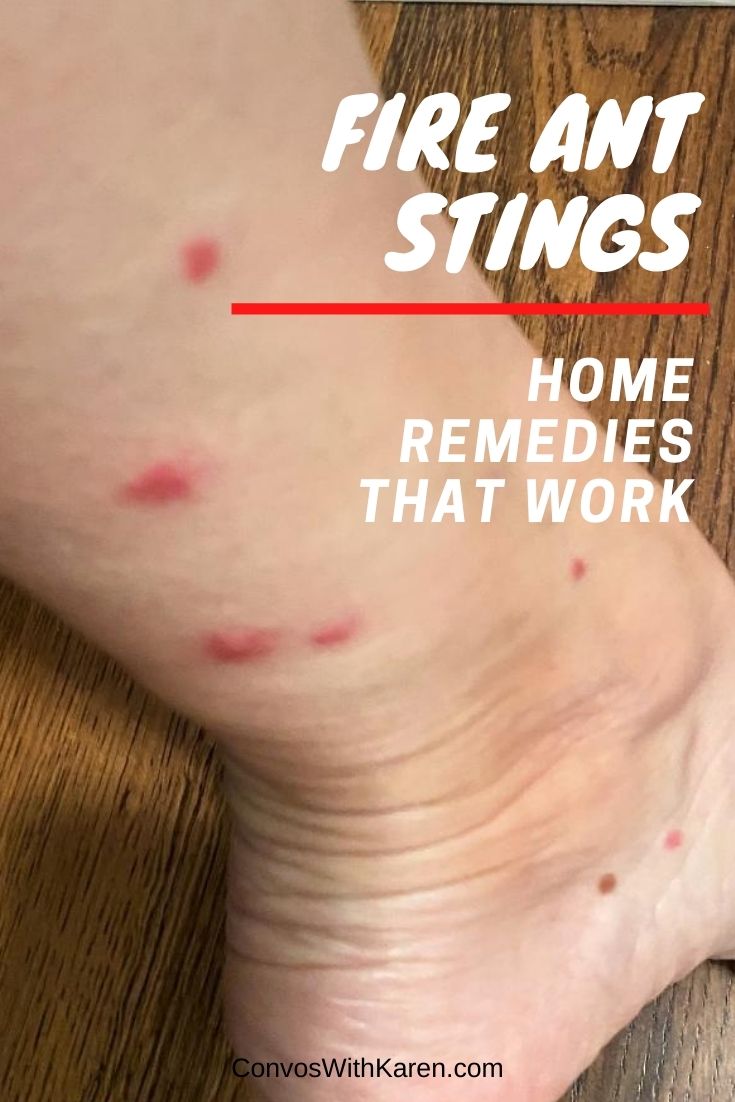 We’ve been doing lots of yard work at our home in South Carolina. Unfortunately for me, that led to experiencing the pain of fire ant bites first-hand, not once, but twice. The first time wasn’t too bad, though I asked friends on Facebook for home remedies for fire ant bites.

The second time was horrific! I had 37 fire ant bites on my feet and ankles.

At 3:00 a.m. with severe pain in both feet, I forgot the good advice of friends and went online instead to research home remedies for fire ant bites. I tried them all. Every. Single. One.

And then I remembered I had asked friends for advice on how to treat fire ant stings and scrolled through my feed to find the post.

I have really smart friends.

One of their remedies (suggested by many) actually worked.

This post is NOT a substitute for medical care. If you are unsure whether these treatments are safe for you OR if you are experiencing serious symptoms, including but not limited to trouble breathing, swelling of lips, mouth or face, hives over your whole body, fever, chills, or severe pain, call 911 and/or your doctor immediately.

First, How do you know when a fire ant stings you?

When you disturb a fire ant, it grabs on with its mandibles (jaws) and gets to work. A fire ant stings repeatedly from its back end, releasing venom at the fire ant sting site.

If the initial burning pain doesn’t signal a fire ant bite, look for a circular pattern of stings. Fire ants hang on with the jaws, then sting in a circle pattern from the center point.

If it is an ant sting, What is the best thing to put on fire ant bites?

There are lots of suggested remedies for fire ant bites, but not all of them work.

I DO NOT RECOMMEND these as the best way to treat fire ant bites:

These home remedies for fire ant bites help (but they aren’t the best):

So, What are the best home remedies for fire ant bites?

After trying all these home remedies for fire ant bites, with Preparation H working best, I still had intense pain and itching from my 37 fire ant bites.

That’s when I remembered my friends on Facebook and looked for the post. Their recommendations? Yellow mustard and white vinegar.

Yellow mustard has a high vinegar content, so it makes sense that if these home remedies for fire ant bites worked, I could use either one.

White vinegar is a lot less messy, so I opted to try that first.

It worked! I finally had relief for my fire ant bites.

But then, 20 minutes later, the pain and itch was gone! I finally found the home remedies for fire ant bites that works. YAY!

Even better, the vinegar treatment lasted about four hours. There’s no risk in reapplying (though if you scratch the bites open it will sting). I used this fire ant sting treatment over the next 36 hours until the bites stopped burning and itching.

Since then, I’ve been bitten by a fire ant once more, only one bite, and used white vinegar immediately. The bite never bothered me again.

The first time I got fire ant bites, I accidentally stepped into a mound while wearing sandals. A bunch of ants chomped down on my foot at one time, causing sudden, intense pain.

I jumped away from the mound to the driveway, safe from any nearby mounds. I brushed the fire ants off my foot and ran into the house to scrub my foot with soapy water.

Then, I iced it for about 20 minutes and applied some topical antihistamine. Within 12 hours, the pain and itching were gone.

The second time I got fire ant stings, I didn’t realize it. I wore footie socks and tennis shoes to protect my feet, watched (not carefully enough) where I stepped, and watered my new garden.

When I came back to the house, my legs itched, but not bad. I figured I had gotten mosquito bites or brushed against a plant I’m allergic to.

When I went to bed a few hours later, the itching intensified. I thought it was chigger bites which are common in the south. But, then the itching became intensely painful, and I went online to diagnose myself. (You do, too, right?)

That’s when I learned that the fire ant stings in a circular pattern. I looked at my bites. Yep. The telltale circular pattern confirmed what the intense fire ant bite pain was already telling me — they got me again. The pain and itching from the bites lasted about two days, thanks to the white vinegar home remedies for fire ant bites.

Untreated, fire ant bites can burn or itch for up to a week. Should you pop a fire ant bite, the open sore might take longer to heal — especially if it develops a secondary infection.

How common is Fire ant allergy?

Here’s some helpful advice to determine if you are allergic to ant bites:

When in doubt, call your doctor or 911. This blog post is no substitute for professional medical advice. It is merely a guide.

A severe allergic reaction to ant bites should be treated promptly. Call 911 or your doctor if you suspect a severe fire ant allergy.

Should you pop a fire ant bite?

Fire ant bites develop a nasty looking pustule (Ewwww… even the word is gross) several hours to one day after the initial fire ant sting. You might wonder should you pop a fire ant bite to release the venom or drain the bite or just get rid of the gross pustule.

If you found this post informative, you may also enjoy these:

If you live in an area where there are lots of fire ants, share this post. The more we know, the smarter we are! And knowing effective home remedies for fire ant bites is a really important thing in the south! (I’ll admit, it also encourages me to know the stuff I write makes a difference.)

Previous Post: « Easy Asian Pork Loin for quick family dinners
Next Post: What are the benefits of water? »